Great Britain topped the medal table at the Under-23 World Rowing Championships at Sarasota-Bradenton in Florida. Four gold medals for the squad on the final day on Sunday July 28th brought the total to 6 gold and 2 silver medals, their best ever medal haul at the Championships.

Durham ARC had an interest in two of the finals with Hope Cessford selected in the Women’s coxless four, an event added to the programme ahead of the 2020 Tokyo Olympics, and James Snowball selected in the Men’s pair, both former DARC Junior squad members.

The GB Women’s four of Alex Rankin, Lauren Irwin, Hope Cessford and Lydia Currie took the gold medal in Sunday’s final after holding off a challenge from Ireland who took the silver medal, with USA in the bronze medal position (medal presentation photo by World Rowing).

Until leaving to study at Harvard University in 2017 and competing for Radcliffe in the USA, Hope had much success representing Durham ARC, winning a gold medal in the Women’s Junior 16 single sculls at the National Junior Championships at Strathclyde Park in 2015, before going on to form a partnership with Lauren Irwin, then of Chester-le-Street ARC, achieving success in the Women’s pair at the Metropolitan Regatta in 2016. Both were then selected to represent Great Britain in the pair at the 2016 World Junior Championships in Rotterdam, and Hope rowed in the GB women’s four at the Junior World Championships in Lithuania in 2017. 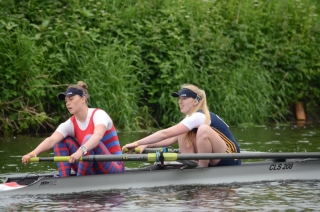 After qualifying through the repechage James Snowball, now of Oxford Brookes University, and Rufus Biggs of Molesey Boat Club finished 6th In the A final of the Men’s pair on Saturday.

James, who had also rowed in the Oxford Brookes eight that won the Temple Challenge Cup at Henley Royal Regatta 3 weeks previously, rowed as a Junior at Durham ARC and was a member of the DARC Junior 18 eight who won the gold medal at the National Junior Championships at Nottingham in 2014.

More than half of the 50 athletes selected for the GB U23 team represented clubs supported by British Rowing through its High Performance Programme in Clubs initiative, which covers the universities of Edinburgh, Durham, Newcastle, Oxford Brookes and London, as well as Leander Club and Molesey BC. 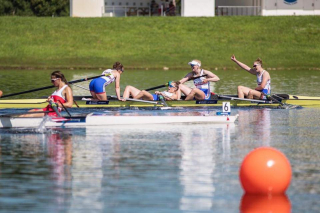 Lauren has also represented GB at the 2017 U23 World Championships in Bulgaria as well as coaching and mentoring young rowers at Durham University.

British Rowing Director of Performance Brendan Purcell said: “To come away from the U23 World Championships with six gold medals and two silver medals is incredible. As Chief Coach for the U23s, Pete Sheppard has brought these athletes and coaches together to deliver a truly outstanding team performance.

“Everyone has stepped up over the past six weeks and then delivered their best performances on race day. In every event we were extremely competitive and it’s fantastic to have so much strength and depth for the future. A lot of these athletes will step onto the senior world stage in the coming years and keep British Rowing at the forefront of world performance.”

Video coverage of each of the U23 finals is available on the World Rowing website here.