The sprint racing season stuttered into full swing at the weekend, the predicted effects of Storm Hannah putting paid to the Junior Inter Regional Regatta (JIRR) on Saturday, while further north Strathclyde Park was able to avoid the worst of the weather to enable the newly styled Scottish Rowing Spring Regatta to go ahead.

Fresh from their Easter training camp at the Barcelona Olympic lake in Banyoles, Spain, the Juniors will be disappointed at the cancellation of the JIRR, scheduled for the first time to take place on the 4 lane course at Peterborough. DARC crews had been selected to represent the Northern Region in 4 events, the J14 girls 4x+, J15 boys 4x+, J16 girls 4x- and J16 boys 4x- after coming through trials at Cambois Rowing Club in March. 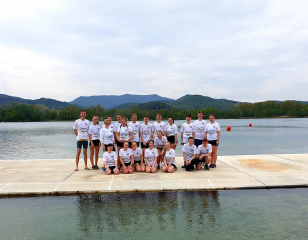 The 2-day Scottish Spring Regatta (incorporating the Scottish Student Championships) attracted a strong field from Scotland, Ireland and the North of England to contest over 200 scheduled races, with the14 entries from DARC distributed evenly between Saturday and Sunday.

First in action on the 8-lane buoyed course on Saturday morning were Gabrielle Maxfield and Grace Stewart-Piercy coming 7th in the ‘Restricted 1’ 2x, and soon afterwards 5th in the Women’s Open 2x.

Next to race were Sam Taylor, Mark Humphries, David Dowsett and Adam Morris, finishing 6th in the J18 boys 4x- behind a strong Chester-le-Street quad.

Masters events got underway in the afternoon over a shorter 1000 metre course, Kim Forster and David Muse (top) putting in the performance of the day taking second place to Berwick in the Open Masters C double sculls. Shortly afterwards Kim took 4th place in the Women’s MasC 1x.

Adam Morris was in action again in a field of 20 scullers entered for the Open ‘Restricted 1’ 1x, finishing 4th in his heat and therefore failing to qualify for the final.

Sunday morning started well for Adam Morris who came through heat 2 from a large field of 23 in the Open J18 single sculls to qualify for the semi-final, but a fourth place finish prevented him by just one place from qualifying for the final. 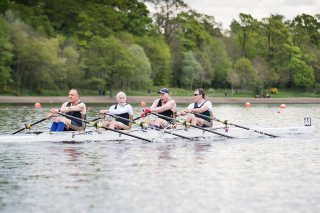 Success was to arrive thick and fast in the Masters events, David Muse finishing a close third behind Stirling in the MasAB 1x before John Appleby secured the first win of the weekend in the MasGH 1x. 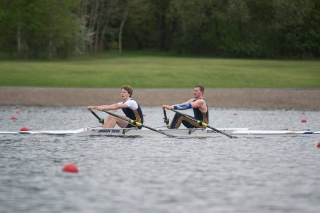 The day rounded off with 3rd place in the Open ‘Restricted 1’ 2x for David Rutter and Nicholas Baird, leaving DARC with a good haul of 3 first, 1 second and 2 third places over the weekend.

All the results can be found on the Rowresults website. 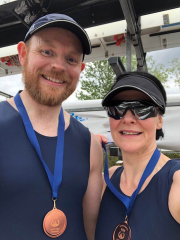 Success would not be possible without the efforts of an army of volunteers whose preparation and diligence enables events such as these to take place, and we should be most grateful for the time and effort they put in.

Congratulations go to former Junior squad members Harry Coe and Havana Tilly who have been a massive help to the J13 and J14 squads, and who recently completed their Level 2 Coaching qualifications. The development of new young coaches is a great asset to the Club.

As well as this six members have recently qualified as Level 2 Royal Yachting Association launch drivers, which will be another asset to the Club, so we extend thanks to David Oliver, David Beattie, David Hepple, Ray Dominy, Fiona Ashton and Martyn Calkin.

With a busy regatta season upon us additional help spreads the load and is always appreciated so don’t be afraid to come forward.

Thanks to Rob Eyton-Jones for the photos.