Thirteen DARC members were joined by Roger Bean, now of Stourport RC, who had travelled from the Midlands for the occasion, and Victoria Dektereff of Tees RC, to form the 3 crews. As Roger and Victoria had each recovered from a stroke in the past and all the others in the crews have had family members affected by stroke it was decided to combine the row with some fundraising for the Stroke Association. 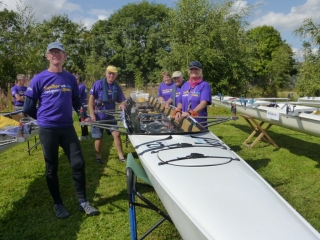 The Great Tyne Row is arranged by the Northern Rowing Council and attracts entries from around the UK. Because the number of stable boats in the region is limited, arrangements were made to borrow boats from Durham University, and to loan boats to other clubs who wished to take part, hence further complicating the already complex logistics of taking part and getting crews and boats to and from the start and finish. 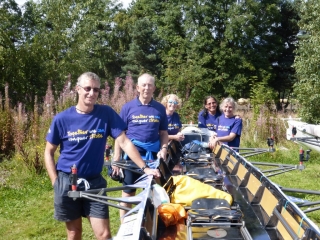 With Tees RC’s trailer booked for a regatta at Hollingworth Lake on the same day, DARC offered to trailer the 2 Tees quads going to the Great Tyne Row, one of which was being loaned to Tynemouth RC, while one of the DARC quads was loaned to Tyne ARC. 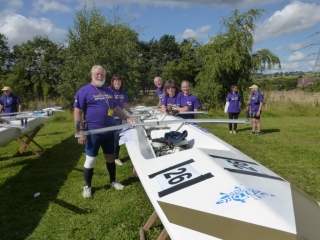 This meant transporting 6 stable quads, but due to a clash with the World Masters Regatta in Bled DARC didn’t have a trailer capable of carrying that number, or a suitable vehicle to tow it, so it was necessary to borrow these from Durham University. Transport arrangements are always more challenging than the rowing itself. 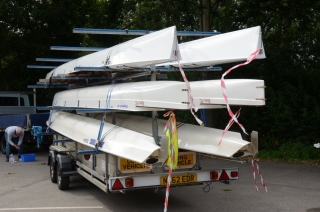 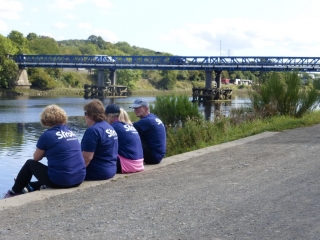 All arrived safely at the finish line at North Shields before continuing across the harbour to land on the beach at Tynemouth, where another session of trailer loading awaited them before the BBQ and presentation of awards.

Fine conditions throughout made it a most enjoyable day. See the Great Tyne Row website for further details including results. The FAST crew and 30 Strokes a Minute finished joint 15th in 2hr 13 mins. Stroke’n’Recovery came 31st in 2hr 51 mins. 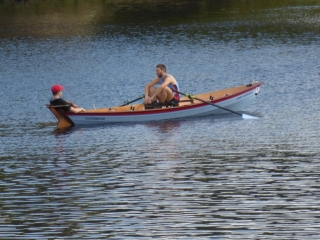 Tyne United’s open quad was the overall winner in 1hr 47min, with Weybridge and Weyfarers joint winners in the mixed category, and Weybridge also providing the fastest women’s crew. Will Hamlyn of Gateshead CRC won the Harry Clasper Award for being the first competitor ever to complete the event in a coxed single scull, using Gateshead’s Dory, James Renforth, and finishing in 3hr 04 mins. 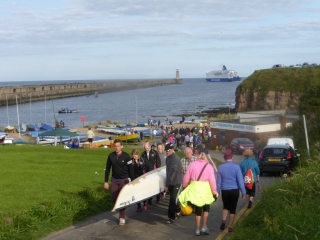 Thanks go to our trailer drivers Mark French and Mark Bell. The event is co-ordinated by a small group of dedicated volunteers from the Northern Rowing Council. If you can help by supporting the event in future there is information about the types of support you might like to consider.

In total the DARC crews raised £1567 for the Stroke Association.