The usual suspects- Stanley, Paul; Stevens, Micky; Gargan, Jed; The Rutters, Sarah and Paul aka ‘Biggles’; yours truly, Jaggard, Andy, not forgetting our esteemed leader, by mutual consent, because he’s sensible .. Mr Apple-boy, John (Now, John, I know you’re not happy with your new name, but it’s nothing to do with me, blame that commentator at Varese for getting it wrong at the medal ceremony, anyway, it’s your own fault for bagging 4 golds”

Vitally, we were also accompanied by our support driver, Mr Derek Gordon. It started badly when I asked Micky for the schedule:

“We ride to Alston and drink 8 pints”

“You don’t need them, you just follow the signs”

“Where am I staying?”

“You’re in a triple room, with Stanley, and Appleby .. the two tenors .. bring some ear plugs. I’m in a single room with a bath”

The logistics had been carefully planned – 2 days – 70 miles on the 1st day, overnight in Alston, 60 miles the 2nd day to Sunderland. 2 cars, 7 bikes. A 6am start on the Saturday morning to drive over to Workington. What could go wrong?

I’m glad you asked – Stanley and Stevens, that’s what. The Rutters were waiting to give them a lift, but they’d set off in their own car heading for Whitehaven. John Appleby, (there you are John, no more of that Apple-boy nonsense) realised he needed to take command of the situation and thank God for mobiles,

“Where are you headed Micky?”

“OK, we’ll go to Workington then”.

A miracle .. in Workington at the quayside, the Irish Sea grey and forbidding … but seven riders raring to go. Six old masters and a … Sarah. Derek in the ‘recovery’ vehicle.

The rest of the ride was uneventful … .. alright, there were one or two hitches.

As we set off, looking around, I noticed they were all on mountain bikes with those fat, chunky tires, I was on my road bike, with beautifully smooth skinny tyres

“We’re not going off-road are we?”

“There might be one or two short sections .. but don’t worry, you can go the alternative route.”

Sarah was on a new bike having a few problems with her fancy gears, so after a few miles, Paul Rutter and Sarah had taken up the rear, if you know what I mean. Meanwhile the five of us had been cycling up a single track lane for several miles. And then suddenly, a dead-end, a farm gate and beyond a stony farm track, with bogland either side. 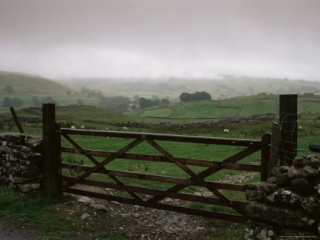 Mr Appleby: “Ah, dead-end, the other road just leads to a farm, so”(looking at my lovely road bike, with a hint of a smirk) “it looks like the only way for you is back or …”

Micky piped up: “You could go cyclo-cross”

“See that big tree, Andy” (pointing to a distant trunk, about a mile away), “that’s not far, and then it’s just down steeply to the lake .. only a couple of miles”

So here we were, the four of them mountain biking on the stony track, me jog-hobbling along behind, in my cycle shoes with those clip-on things, with the bike over my shoulder. The herd of cows being driven towards us, followed by a very large bull, was an additional factor, which added to the complete picture. Place the bike between yourself and the bull, and rehearse the few steps to the ditch and the leap across. 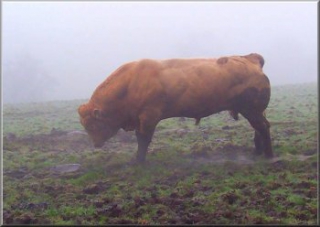 “I was never worried, you know .. but it was quite a big bull”

The steep downhill section was large slabs of wet rock .. tricky in cycling shoes, but fortunately I have some ice-skating experience … and Jed waited for me at the bottom of the hill. The rest were heading for the café. Behind us, Paul Rutter had blown a tube, on the treacherous down hill section, and Sarah was lost, somewhere in the woods. As I said, uneventful.

Tea and sarnies in the café. We were behind time, it would be dark by 5, and we needed to press on, but Derek was around to pick up the pieces. Paul’s spare tube was the wrong size, but fortunately Jed had a spare tube he offered to lend Paul. Now, at this point I have to ask you a question. 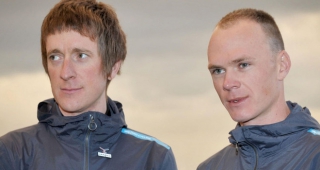 Would Chris Froome have lent Bradley Wiggins his spare inner tube in the middle of the Tour de France? Exactly.  I have to say that even at this early stage, I suspected that Jed had his sights set on the yellow jersey .. and suspiciously, it turned out later,the spare inner tube he lent Paul Rutter had a slow puncture.

After the café, things seemed to go well for a while. But now here we were again, on a gravelly off road track freewheeling down the river valley. Worried about puncturing I sought Micky’s help.

“No problem, Andy, just drop down onto that road there, and meet us at Frangsworth .. just follow the signs for Penrith, you can’t go wrong”

Within minutes, I was on the A66 with large lorries trundling by. I never did see them again, that day.

After a strangulated mobile call with Micky, with the wind whistling in the background, I made it to Penrith, cycling flat out. Were they ahead of me, or behind me, I have no idea even now. “We’ll meet in Langwarthy outside Penrith”. I could see the forbidding shape of the massive HartsidePass in the distance and was keeping up a good pace to try to catch them up, though I seemed to be veering too far to the right  .. but just kept going. Over a small bridge and then alongside a fast running river heading west. This can’t be right. There was a sign – Appleby 4 miles

“Jaggard, you are lost aren’t you! .. head back for Langwarthy, Derek will meet you there.”

“OK, John, you carry on, I’ll catch you up on Hartside”

Re-tracing the route, I realised where I was …. miles off course. Worked out a cross country route to get to the bottom of Hartside pass. Derek and Sarah met up with me with drinks, chocolate, and bananas – thanks!  In the gathering darkness, the wind rising, I made the top of Hartside pass only 5 minutes behind the main party, then a free wheel for seven miles down the moors into Alston, chilling, chilling, chilling ..

Meanwhile, after multiple punctures, Paul (Biggles) was half way up a very steep track to Hartside pass in the dark.. Fortunately, as an IT guru he was able to send Derek and Sarah his GPS location, he loves his techy stuff that boy .. and they found him in the middle of a field ..

I staggered into the Cumberland Arms … what a wonderful old-fashioned hostelry, with a friendly landlady, a blazing fire in the grate, 5 real ales on tap ..and a bedroom with Stanley and Appleby, complete with several piles of steaming kit.

Over a lovely pint in front of the fire, trying to warm up, I met up with Micky and the rest .. “Hello, Andy, haven’t seen you for a while ..”

Tasting the range of beers in shot glasses, then downing several pints, a wonderful dinner, Sarah got out the marble rolling pin out and gave us all a massage. We were past caring.

The two tenors didn’t disappoint. I would describe the sound as something like an old diesel engine starting up.

Next day, the medical report was long. As Jed advised us cheerily ‘if you start chafing by the time you get the Vaseline on it’s already too late”, Stanley had his knees, Appleby and Stevens were overdosing on ibuprofen. Over a hearty breakfast we at least consoled ourselves with .. “We were lucky with the weather yesterday.” 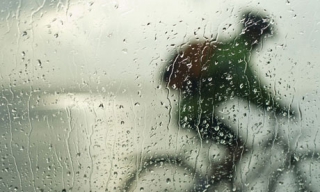 Sunday, it rained on and off, all day, and with a gale force wind, conditions were vile. Mick donned a pink refuse bag, which made him look like he had a couple of pink angel’s wings, bits gradually blew off. After the chaos of the previous day, where we seemed to keep ‘losing people’, everyone was desperate to keep up. We were soon soaked and chilled to the bone. We left a trail of desolation in cafés, soaking chair cushions, kit on radiators dripping  gently on the floor.

“So let’s be clear, we’re going to Sunderland?”

“Yes, at the end of the route, you go through Sunderland Football Club’s car park” “Aren’t they playing at home today to Newcastle?”

Consett was wild, wet and cold, with a wicked wind, and I got an additional soaking as a lorry drove through a large puddle. A couple more layers on, and cycle hard to try to warm-up.

But now, we’re on the old train route, amongst the trees, coming down from Consett towards Newcastle, some protection at last, and a pale sun is shining through. It looks like we’re through the worst and can relax and enjoy the test of the ride. There’s wet leaves and mud on the track, but heh! I could almost enjoy this. 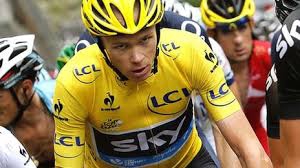 But what’s this, Chris Froome, sorry, I mean, Jed has moved to the front, and is moving at speed. What’s going on? Is he trying to take the sting out of Appleboy’s sprint finish. Through the quayside, Jed ‘Froomy’ Gargan, obviously knows these parts well, and is weaving his way along the back streets, cycleways, and towpaths at some pace. Desperate not to get detached and lost, we’re moving as a tight six now, places changing rapidly. Stan is on Froomy’s shoulder, a picture of grim determination. Appleby declares that he’s “shot”, I move closer to his back wheel – never trust a seasoned racer. 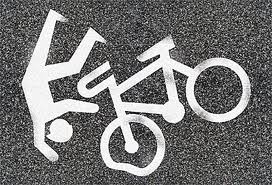 And then with three miles to go it’s, “man down” as Stanley’s new bike slides from underneath him on a leaf covered bend .. and Paul gives the tarmac a Geordie kiss. John mops up the superficial damage, a bloody nose and lip, with a handy pack of Kleenex (other brands are available) .. but the enthusiasm has gone out of the final sprint now, and we meander quietly through the docks at Tynemouth to the end of the route. Ever reliable and resourceful, Derek (and Sarah) are there with the Durham ARC minibus and a trailer with bespoke chains to tie on our bikes.

I had a great time. Thanks Micky.

Next time, you know, we could … no, forget it